"Mozart and The Whale"

A.J. Mahari's Review of the Movie 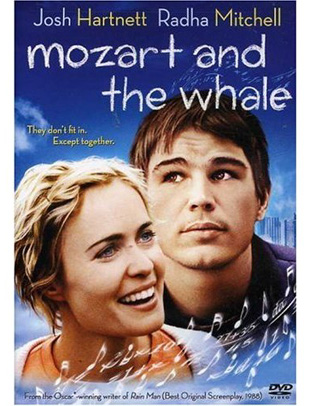 "Mozart and The Whale" is a dramatic-comedy inspired by the lives of two people with Asperger's Syndrome (AS). It chronicals their budding romance and the nature of the challenges presented by Asperger's. Donald is a good-natured but hapless taxi driver with a love of birds and a superhuman knack for numbers. Like many people with AS, he likes patterns and routines. But when the beautiful and complicated Isabel joins the autism support group he leads, his life - and his heart - are turned upside down. In his journey, Asperger's, while very much a part of that journey, takes a back seat only to the human desire for love and to be loved and for connection despite all odds.

Donald runs a support group for people with Asperger's and in the group they can all be themselves.

Donald, not long into the movie, while talking to the guys in the group in the park said that as a young boy it was obvious he wasn't the child his parents had hoped for and that he wasn't "normal". He adds that "you can't control people or even predict them" pointing out that things are different with numbers and that as he always says with numbers, "you can count on them."

Donald then says, "People with Asperger's want contact with other people very much, we are just pathetically clueless about it all."

A new member joins Donald's group, Isabel. Not long after they meet they are drawn and attracted to one another. There is a celebration of what they can understand about each other from their own Asperger experience. This understanding, however, in the context of their relating has its limits, challenges them both and lead them to experience a lot of stress and anxiety as they continue to find their way to each other. Their journey is not without its obstacles.

The chief obstacle they face, ironically enough, is how to accept their collective difference in society and also cope with their own individual differences within that collective and shared difference.

At one point in their journey the question as to what the point of the efforts to sustain the journey of their connection, of their love, is arises, and the answer given is, "to not be alone."

This is an often unrecognized similarity between those with Asperger's Syndrome and those who are neuro-typical (NT). It is at this juncture where the reality of being human superimposes any differences and where there is a meeting point of not wanting to be alone and of wanting to be connected.

As someone with Asperger's Syndrome what I think is most noteworthy about this shared commonality is how it gets so lost in the translation between what it means to have Asperger's and what it must mean to be Neuro-typical that I think often it isn't recognized as something we share. We do share this desire to know others and be known. We do share this want to not be alone but we do not share it or perhaps experience in the same ways exactly. The ways that each of us, Aspie or NT, express or go about trying to cope with connection is to varying degrees, different.

The movie is tender and moving. It accurately depicts aspects of what it means, looks like and feels like to have Asperger's Syndrome. To one degree or another I think most with AS will find something to relate to in the characters.

Izzy's excitment about being out with Donald on Halloween because its a night when no one will notice them or their differences, she dressed as Mozart and Donald dressed as a whale, forwards the comparisons and contrasts that run throughout the movie between those with Asperger's Syndrome and animals.

The Asperger paradox as I know it is well illustrated in the movie when Donald and Izzy's relationship is threatened by one unintentionally expecting the other to be or pretend to be more normal in what I found to be a very compelling part of the movie.

I was really moved by another scene where Izzy and Donald are at a park with animals and Izzy is being copied by some form of a primate. It was an ironic twist on the way that most with Asperger's, to one degree or another, may relate to being an animal in an NT cage in life trying so hard and so often to mimic what others do.

The movie points out what something else that I found true in my life - the way that many who have AS or who are on the autistic spectrum can and do relate more easily to animals. Animals don't judge and they don't require that we pretend to be normal or fit any particular mold of relating.

Donald loves and identifies with whales. For Donald the whale symbolizes the parade, being the parade as opposed to being on the sidelines of life watching it unfold as people watch a parade. Donald says of the whale that "the whale is the parade". Just as I have come to realize that my life is my life in a way that works when I am just being myself.

Sharing a language of what society terms social dysfunction does not in and of itself mean that two people with Asperger's share an entirely common language, way of being, or even way of easily connecting.

Donald's group illustrates the paradox of life with Asperger's Syndrome very well. It illustrates the desire for connection that paradoxically exists and is experienced through the reality that those of us with Asperger's do not "speak" the same social language as neuro-typicals. The group is together alone and each member struck me as being alone, together.

Donald and Isabel both have incredible awareness of how they are different from NT's and how they are in their own similarity each also different from each other. The differences that they are challenged by, like all of us with Asperger's, are challenges that persist despite their awareness. Both Donald and Isabel, along with many of the member's of the group have come to accept the differences that paradoxically present blessings and burdens in life.

"Mozart and the Whale" is both an inspirational and an educational movie. As an adult with Asperger's I was both happy and sad at the ways in which I could relate to the main characters. For those who have someone with Asperger's in their lives I think this movie will offer you several snap shots of the way that we experience many aspects of life.

Inside My Asperger Experience - Audio Program $12.99

by Ms. A.J. Mahari - Is a revealing, insightful, and educational journey for anyone with Asperger's or who wants to understand more about it from the inside out.

"In this audio program A.J. Mahari shares her experience of finding out about Asperger's Syndrome and her journey of facing it and going deeper within to find its meaning and purpose in her life. Mahari's self-discovery in her "Asperger Experience" is a shining example of the endurance of the human spirit and is an up-lifting and inspirational look at the struggle and quest for self-understanding and self-acceptance from the inside out and in her own words." - Donna J. Verderskeet, Ph.D.